Örebro is literally a centre of connections. With several national routes and European highways running through, you can make a solid business investment basically anywhere in the region. 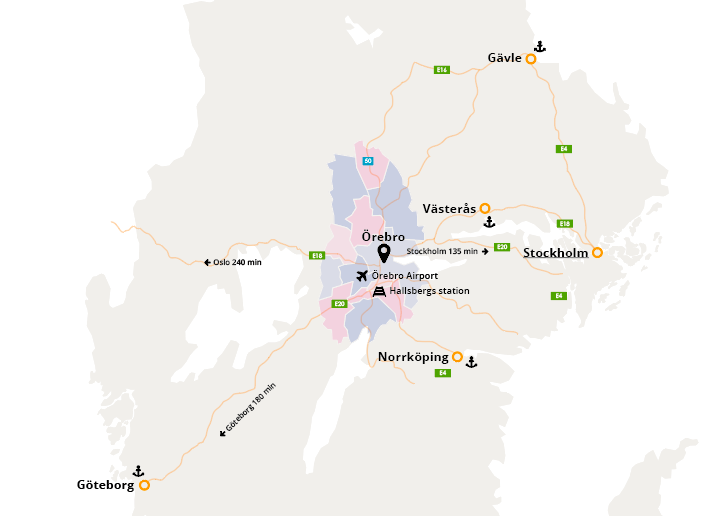 Our region is crossed by the European highways E18 and E20, and the national routes number 50 and number 5, among others. Safe Park Brändåsen in Kumla is a gated facility built to accommodate for all road transports passing through the region. Brändåsen offers various amenities and secure truck parking where drivers use a code to access the area.

Örebro is one of the nation’s busiest regions when it comes to heavy transports. Thanks to the strategic location, right in the middle of the national north-to-south connection and proximity to Stockholm, Oslo and Gothenburg, our region has a very interesting potential for an electric road pilot project. An electric road would generate interest and opportunities on a wide scale for our entire region, as well as being an important leap towards sustainable transports and the environmental sustainability goals of 2030.

In the summer of 2019, the route Hallsberg-Örebro was investigated with the potential of becoming part of an electric road pilot project conducted by the Swedish Traffic Administration’s programme for electric roads. There are four research facilities for electric road technology in the country, but now it was time for a more comprehensive analysis of how electric roads can generate value also on a longer distance. Two routes are currently being investigated and the final decision of which of which will be the pilot project will be announced later this year.

In parallel, the Swedish Traffic Administration is also working on a regional road plan to analyse the potential for an electric road facility along the route Hallsberg-Örebro.